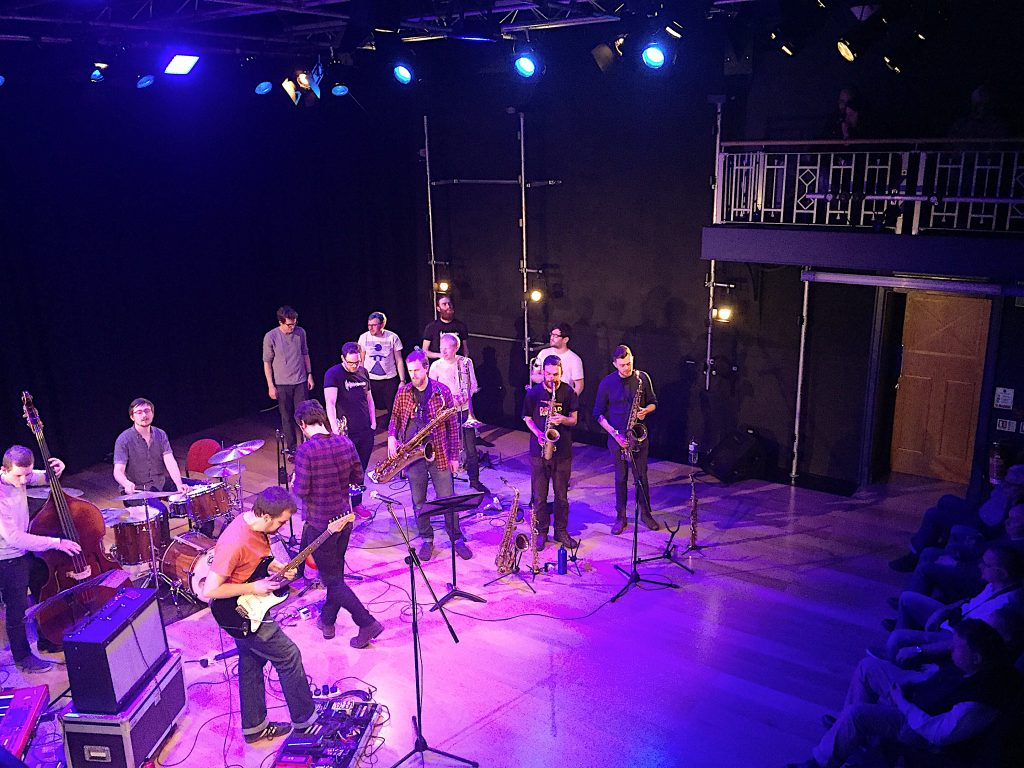 It is without a shadow of a doubt that over the last couple of years the Beats and Pieces Big Band have been at the forefront of contemporary large jazz ensembles.  The tail end of 2017 saw them record their third album, tour Europe and kicking off 2018, reside at Ronnie Scotts for 3 nights.   It is easy to forget that this 14 piece ensemble have been around for 10 years – next Saturday is the 10th anniversary of their first rehearsal – and have actually been pushing the boundaries of big band music consistently for that long.  How time flies!

Their concert in Derby was, therefore, a celebration of the last 10 years, featuring music from their last 2 albums, as well as their upcoming release.  Rocky and Pop quickly showed new listeners what the band were capable of, with a sound that made you sit up straight and a forward energy that left preconceptions about big bands way behind in the dust.  New tune Noise channelled the rock spirit of their Mancunian heartland and Jazzwalk had the audience running alongside its rapid swing.

However, the concert really wasn’t a celebration of 10 years of music-making, rather of incredible playing and writing talent.  With 2 sets of music committed to memory, it was clear that the players were relishing the musical freedom this gave them.  Opened up and exposed in such a way, they stepped into a vulnerable journey with the audience, which we were more than happy to share.  Anthony Brown (tnr/sop) played with a tenderness that had not only the audience, but also the band hooked on his every delicate move around the instrument.  He also showed his writing talents with Wait, a dystopian lullaby featuring Rich Jones on keys and Anton Hunter on some astonishing guitar effects.    Rich shone in Home, his lilting mellifluous lines easing us into the chaotic Klezmer to come.

It was joy to watch a band perform music that it knows so intimately.  Finlay ‘the finest drummer in Berlin’ Panter danced around the kit, commanding the rhythmic complexity required of this band with ease.  The trumpet section calmly fired off solis of ever-increasing difficulty without a care in the world, while the trombones had immense fun colouring the rich sonorities that have become a hallmark of Cottrell’s arrangements.  With a performance like tonight’s, Beats and Pieces Big Band must be thought of less as a large ensemble and more a tight-knit musical family brimming with big ideas, big sounds and even bigger talents.