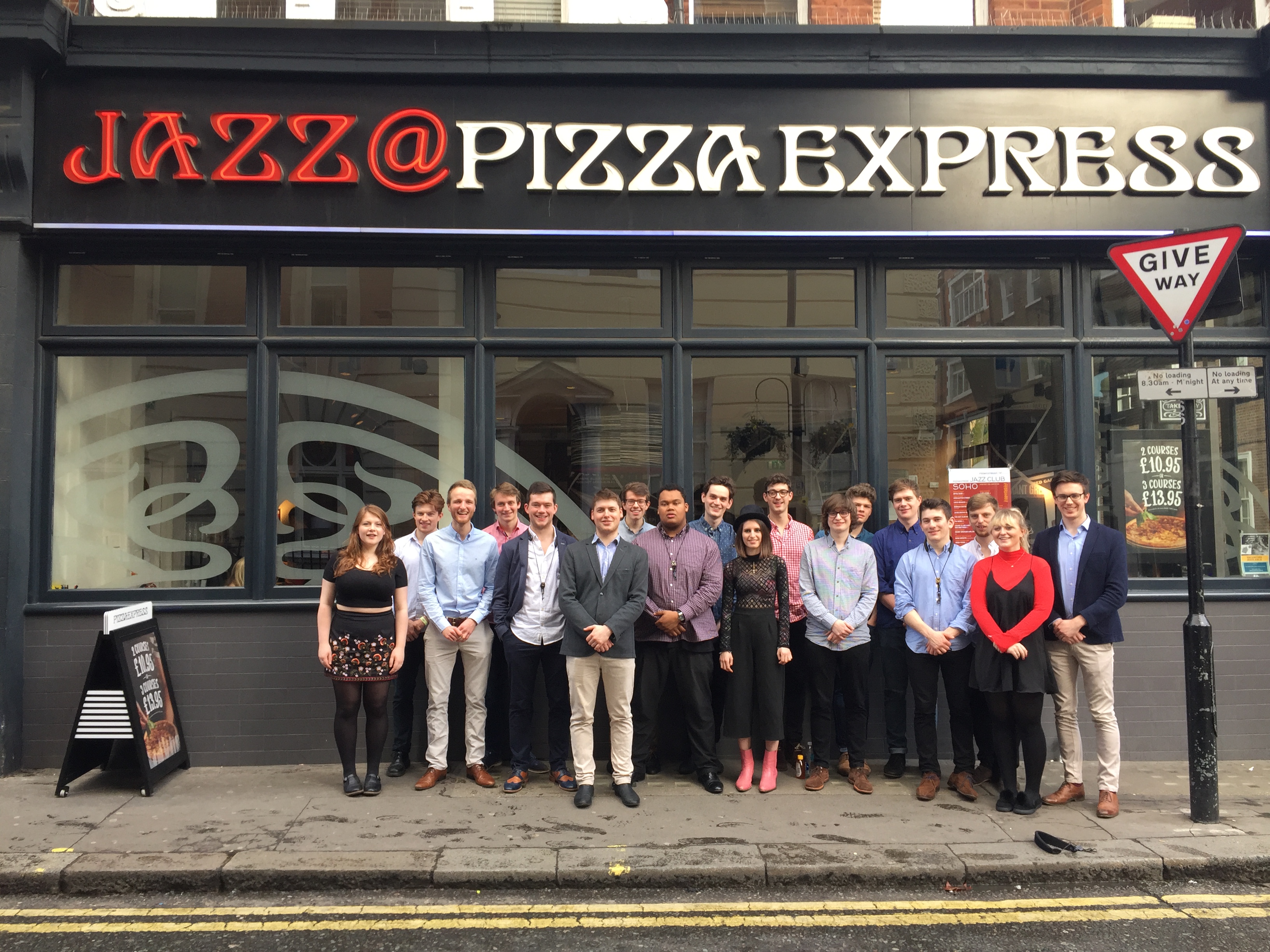 We’ll admit it.  This will be a biased review.

Durham University Big Band (DUBB) change their line-up each year bringing refreshing new ideas and changes of musical direction. They’ve recently branched out, covering modern big band and jazz orchestra charts, as well as delving into hip-hop and neo-soul. We knew we’d be in for a cracking afternoon in Soho, and this year’s gig did not disappoint.

DUBB kicked off with an arrangement of the classic “All of Me“, (live gig recording at the link) featuring Matt Jacobs (MD) on keys.  Scott Chapman’s “Barcarolle” contrasted the first couple of swing tunes beautifully, the lilting horn lines complementing each other perfectly, giving way to solos from Alex Flanders (tpt), Matt McKernan (t. sax) and Ollie Farley (guitar).

It was great to hear Districts’ trombonist Dave Sear’s (depping) solo during “It’s Oh, So Nice“, however the highlight of the set was arguably Callum Au’s arrangement of “Caravan”.  This showcased the incredible standard of each of the sections – and the trumpets certainly shone throughout.  Zach Fox (alto) gave an impressive solo, his energy easily matched by Tristan Bacon (kit) and Ben Bucknall (percussion) trading fours.  The excitement that this chart created amongst the band and audience was palpable, it was a phenomenal performance.

After a top up of Peroni, the audience settled down for a highly anticipated second set.  Opening with Ben Cottrell’s arrangement of Radiohead’s “15 Step“,  DUBB navigated their way through a number of modern charts including the Finnish “Oglutz” and “Fall in Love” (arr. Chris Jones ).  Matthew Jacobs’ own arrangement of Robert Glasper’s “Let It Ride” provided further evidence of exceptional ensemble playing: DUBB’s blend is on point.

Katie Moberly, who had sung on a variety of charts throughout the gig, gave us a final reason to swoon with her sumptious display of vocal talent on Kenny Wheeler’s “Enowena“, channeling her own Norma Winstone.

All right then.  “Love for Sale” – a tour de force from the band, and a real favourite for the audience.  A barnstorming gig closer.

DUBB have got more fantastic gigs coming up this year, and I’m looking forward to hearing their new album (I’m really hoping “Let It Ride” is on this).  If this gig is anything to go by, they are strong contenders to win back top spot at the Great North Big Band Jazz Festival this March.