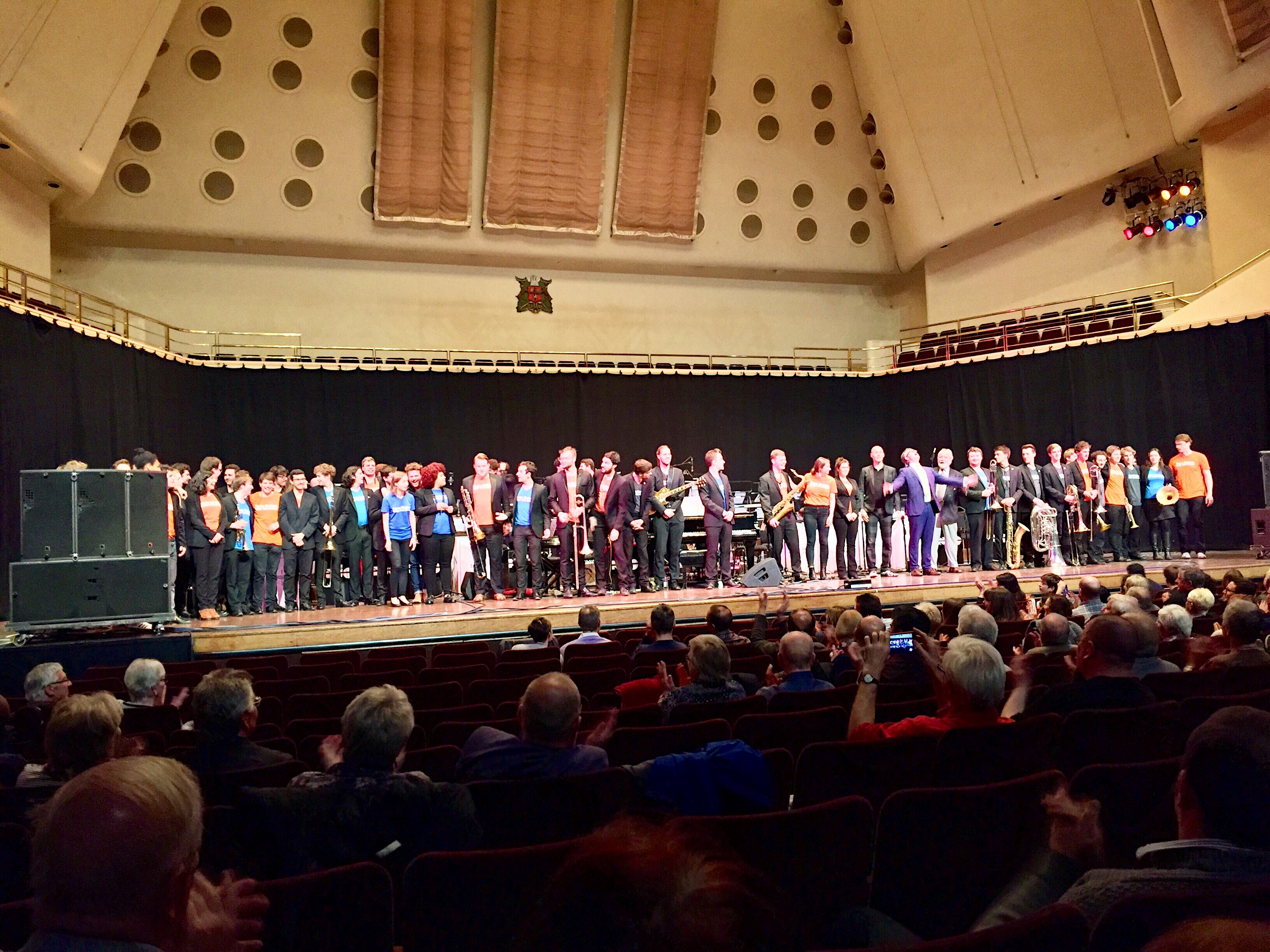 It was fitting that on a day when Britain’s future becomes uncertain, Europe’s finest young jazz talent was on display in Nottingham, united through a shared love of performance and the art form.

The small audience, rearranged into the closer confines of the stalls at Nottingham’s Royal Concert Hall, were a mixed bunch.
Plenty of ‘older’ jazz lovers, some students and a refreshing number of school children gazed up at the venue’s vast stage crammed full of music stands, large rhythm section set out in the centre.

NYJO entered filling only half of this, and Mark Armstrong bounced onto stage.  His energy, warmth and charisma quickly won the audience over.  That trademark blue suit of his conveniently coordinated with NYJO’s blue t shirts.

The band played ‘A Nightingale Sang in Berkley Square’ in homage to the events at Westminster last week, and there were excellent solos from Tom Smith (alto) and Dave (lead tpt, depping from Holland!), as well as on trombone as the band opened up in true big band swing.

1 tune down, 1 band out and another band in.  This time it was the turn of the Dutch National Youth Jazz Orchestra (NJJO) under the artistic direction of Martin Fondse.  Arguably the hippest band of the night, they’d taken a leaf out of Fondse’ style book and wore their orange t shirts with jeans, trainers and desert boots.  ‘Poetry’ had a very Arguelles-esque sound and featured some incredible vocals from their two female vocalists, singing in that style that has become synonymous with Kenny Wheeler’s band and Norma Winstone.

Bujazzo from Germany then swapped places.  These guys were suave.  They had secured a good deal with the tour organisers, getting to wear the black t shirt option.  Gerry Mulligan’s ‘Young Blood’ needed a restart, but there was fine playing on display here.

Then came what we were all waiting for, all three bands on stage at the same time.  ‘The Hunt’, composed especially for the tour by Armstrong featured a Big Band plus a sextet and double rhythm section.  Moving through a number of different Latin grooves, a highlight was the guitarists’ battle.  Similar to the friendly at Wembley on Tuesday night, it was 2: 1 to Holland.

Fondse’ double big band exploration ‘The Future is Now’ suite featured a variety of extended techniques throughout and showcased how far contemporary Big Band writing has come in the last few years.  Tom Ridout stormed through his tenor solo in Armstrong’s arrangement of ‘I’ve Got Rhythm’ to close the first half.

Jiggs Whigham MD’d the second half – and this was a real delight and treat.  Johnny Richards’ ‘Cuban Fire!’ suite performed in indulgent symphonic form.  The applause deservedly went at the end to the rhythm section, who had an absolute roasting.

Even if Europe completely falls apart, this project should long continue.