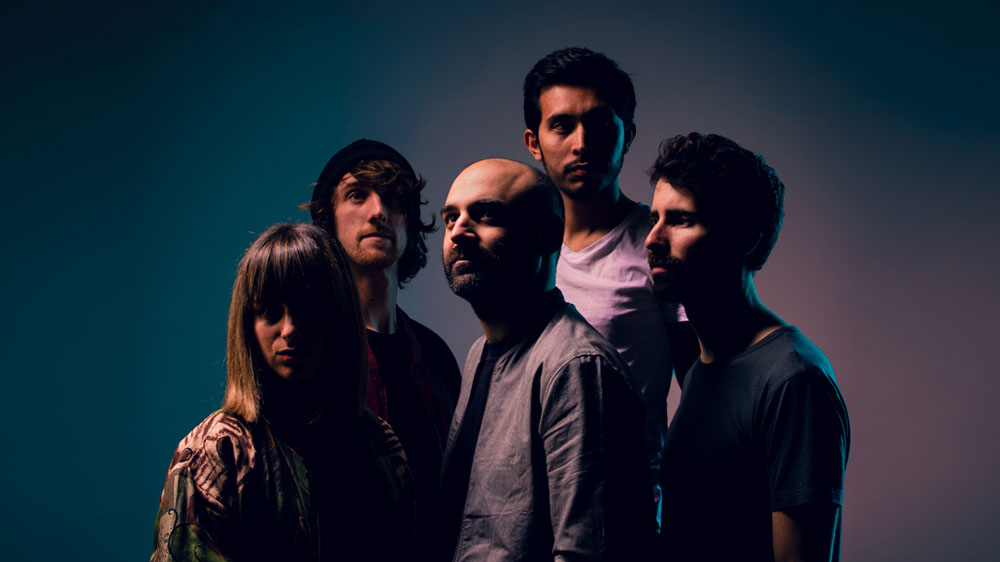 Travelling through places where borders disappear, Kinkajous give birth to an innovative path to nu-jazz. The London based quintet (led by saxophonist/ clarinetist Adrien Cau and drummer/producer Benoît Parmentier, joined by pianist Maria Chiara Argirò, bassist Andres Castellanos and Jack Doherty on keys) conjure a passionate, introspective and powerful music, that draws from their shared love for jazz and electronica. In their quest for new sonic highways, their unique setup and and vision brought them to uncharted territories.

Before a heavy gig as part of the Manchester Jazz Festival tomorrow, we’ve caught up with the whole band to see what music inspires them most.

I discovered Leon Vynehall very recently with his album ‘Nothing is Still’ which is an absolute masterpiece. I love how the electronic elements blend with the orchestra seamlessly and gives the piece a strong sense of unity despite blending so many different elements and techniques. This track/album really reflects in so many ways how I feel as a musician today.

I really believe that FlyLo had as big an impact as JayDee on the musical scene around him (and on myself). This version of ‘Drips/Take Notice’ features some fantastic musicians that have been very influenced in one way or another by Flying Lotus and his label Brainfeeder. (Miguel Atwood-Ferguson, Kamasi Washington, Chris ‘Daddy’ Dave, Thundercat and more). This performance has inspired me in many ways.

This is the first track I’ve ever heard of John Cage. I discovered it as a teenager, at a time when I was very interested in the work of Marcel Duchamp. ’Music for Prepared Piano’ was a game changer, it made me realise that there was no limits to what music could be  (a big revelation at a time when I was doing very classical studies in the Conservatoire). I got myself a copy of music softwares Cubase and Reason and started to experiment with everything and anything.

Miles Davis – Time after time (Live around the world)

A friend of my parents made me listen to this track when I was 16 years old. At that time, being a proper teenager as you could imagine, I was playing music only because I was told to do so.

The fragility and openness of the tune managed to crack open my curiosity and led me smoothly to look for more in the jazz world.

This has been a direct hit in my face! Not much to say really apart from the incredible energy and craziness out of the track which could make you dance and move all over the place. I can tell you that this one has been on repeat for quite a while! How can you be so sharp with a sax and a band!???

I know that electro and synths were already there for decades but I only really discovered this genre through Justice, definitely not the more subtle but it took my breathe away the first time. It’s an easy introduction to something that Jazz should be jealous!

This is the song that made me want to be a bass player. Groovy, funky and full of brilliant bass fills. I wanted to play like this.

Coming from a family of musicians I heard this in my childhood. I’ve always loved this aria and it always moves my emotions. It made me understood the beautiful power music has to move people’s feelings

I quite enjoy simplicity and minimalism. This song is built by simple things but it is still great. I love the harmonic colours used and for me it still conveys so many emotions through that simplicity.

I love this track from his new album “Singularity”. Incredible sonic possibilities. Really inspiring for me.

One of my favourite musicians, a true artist and composer. He always goes beyond the music. A constant inspiration as a live performer and composer.

Because of the way he fuses acoustic and electric instruments to make beats.

Because of the way Dilla changed the way of making beats, for example having a 3 bar phrase completely changes the emphases of the lyrics in the verse and makes it sound awesome!

Kinkajous are playing at Band on the Wall on Tuesday 24th July in Manchester, at a FREE jazz showcase, also featuring Plume and The Broken Orchestra.

Find all the Jazz Plus Picks ever picked in our Spotify playlist: